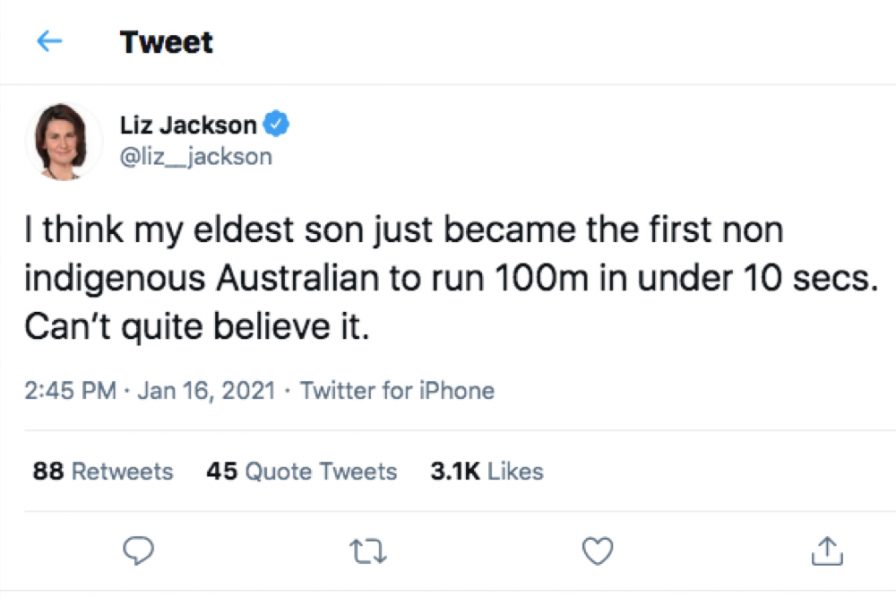 “I think my eldest son just became the first non-Indigenous Australian to run 100m in under 10 secs. Can’t quite believe it,” tweeted Jackson after her talented offspring, Rohan Browning, clocked 9.96s in Wollongong. Twitter lit up.

Let me tell you what I know. Jackson is a former Australian Broadcasting Corporation presenter, reporter and producer, who spent nearly 30 years working for Aunty before accepting a senior media role with the Royal Commission into Violence, Abuse, Neglect and Exploitation of People with Disability. Therefore, Jackson is a communications specialist who knows the power of words and how easily they can be misconstrued, either innocently or intentionally. Browning is Australia’s fastest active male sprinter, clocking a legal 100m time of 10.08s two years before his strongly wind-assisted 9.96s run. Only one Australian man, Patrick Johnson, whose parents identified as being Indigenous Australian (mother) and Irish (father), has sprinted 100m in less than 10s without a tailwind exceeding the legal limit of 2m per second.

Let me tell you what I do not know. I do not know either Jackson or Browning. However, Jackson’s 2,500+ tweets prior to her two-sentence post that trended faster than Browning can run, suggest the casual racism with which Australian society has a major problem is not part of her DNA, although I am confident most of her critics did not trawl through her history before tapping their keyboards to spew vitriol.

Now let me tell you what I think. I think Jackson made a mistake to position Browning’s feat in the way she did, but it was a mistake borne out of a desire to rank him first in a world in which, to borrow a line from fictional NASCAR driver Ricky Bobby, if you’re not first, you’re last. Most of us are guilty of putting the most positive spin on our loved ones, and all of us make mistakes. Australia needs to address its race relations, but I think the Twitter trolls are going after the wrong person in Jackson. And those keyboard warriors ought to view the numerous websites, including those of Athletics Australia and Deadly Choices, on which Johnson is listed as the first man of non-African descent to break 10s for 100m. Surely those websites are also articulating differentiation, not discrimination.